The tilting cab of the MAN refuse collector vehicle gives access to the engine block. Cab mirrors fold in and out. A fully functional tilting mechanism including bin lift lets you empty the small, coloured bins. The refuse container can be tilted and features a lever to move the refuse. Empty the refuse container using the opening tailgate. Tread tyres round off the product. The MAN TGA refuse collector vehicle can be enhanced by the refuse bin set (three small "coloured", one large "grey" bin), item no.: 02607, and the light and sound modules, item no.: 02801 or 02802, (neither of which are included in the delivery scope)

drivers cab:
- Driver's cabin can be tilted
- folding outside mirror
- possibility to view the engine block 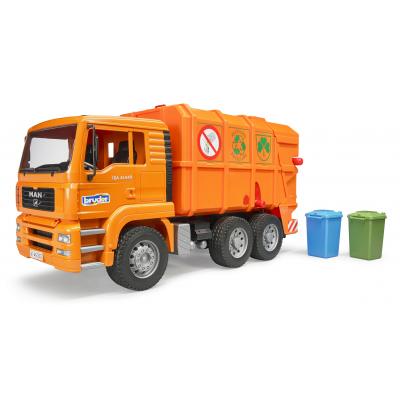 Finally the wait is over and the At long last the Volvo KS EASTER Sets and KS EASTER Volvo are arriv...